Eliminate dangerous glare from rear-approaching headlights with this sophisticated night driving safety accessory from Gentex Corporation. Special sensors and electronic circuitry detect glare and automatically dim the mirror accordingly. An accurate self-calibrating compass keeps you on track; exterior temperature display warns you with an ICE indicator when outside temperature is at or below 37 degrees. 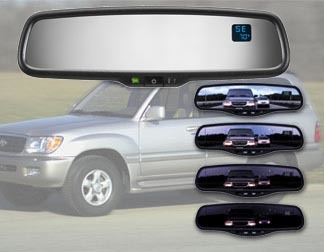 HomeLink®, the Wireless Control System that learns the codes for up to three remote control devices, is available in an auto-dimming rearview mirror. No more fumbling to find the remote control. No more crowded visors with multiple remotes for garage door openers, security lights and entry gates. Now all these devices can be operated with dedicated buttons integrated into a auto-dimming rearview mirror equipped with HomeLink®.

HomeLink®, developed by Johnson Controls, Inc., the world’s leading supplier of automotive seating and interior systems, has grown to become one of the auto industry’s most recognizable brands. It is currently available as a factory-installed or optional feature on over 140 different vehicles.

Gentex Corporation is the leading manufacturer of auto-dimming rearview mirrors. The company’s mirrors use a combination of sophisticated sensors and electronic circuitry to detect and eliminate the headlight glare from rearward-approaching vehicles. Gentex mirrors are factory installed on millions of new vehicles each year. 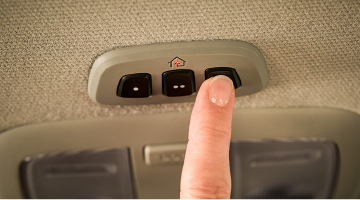 Display Technology -- the liquid crystal display (LCD) appears through the mirror's reflective surface via Gentex's proprietary "transflective" coatings and lighting techniques. The result is a bright, high-resolution display in an intuitive location. The display is driven by a camera located at the rear of the vehicle, and is displayed on the left side of the mirror.

Safety and Convenience* -- From a safety perspective, the Rear Camera Display Mirror should help reduce the risk of backup accidents, especially for vehicles with limited rear vision. Another benefit is the convenience associated with hooking up to boats, RVs and utility trailers.

*Please note that the video display mirror is intended to be used as a supplemental device for drivers and does not eliminate the need to check rearview mirrors or walk around the vehicle, should conditions warrant. When it comes to backing up safely, nothing beats walking around the vehicle prior to moving it.

Gentex pioneered the electrochromic automatic-dimming mirror, which detects and eliminates dangerous rearview mirror glare, making nighttime safer for drivers around the world. Today, Gentex mirrors are the optimal space in the vehicle for the placement of a broad array of electronic technology, and are lower in cost than designing electronics into the vehicle interior. Locating informational displays in the mirror also affords increased safety, requiring the driver to simply glance at the mirror while remaining focused on the road.

Research shows that during nighttime driving, headlight glare from the vehicles traveling behind you can be blinding. Even after the glare is removed, an after-image remains on the eye's retina that creates a blind spot for the driver. This phenomenon, known as the Troxler Effect, postpones driver reaction time by up to 1.4 seconds. At 60 mph, a car will travel over 123 feet in this amount of time. Gentex auto-dimming mirrors make nighttime driving safer by detecting glare and automatically dimming to protect driver vision.

Gentex is the leading supplier of mirror-based displays. The mirror has proven to be the choice location to display driver information, such as rear camera display (RCD), compass, temperature, and much more. The mirror offers a common location across all vehicles as it optimizes space for emerging technology.